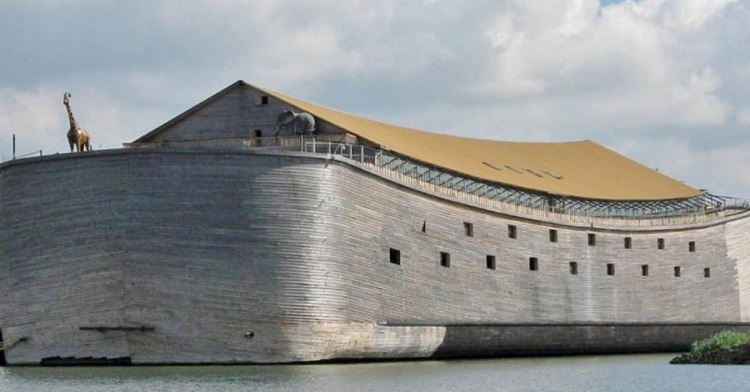 Pieces of art are wonderful, but this guy has outdone everyone else with his masterpiece!

A man from the Netherlands named Johan Huibers was completely captivated by the story of Noah’s Ark. In the early 1990s, he became a father and frequently read bedtime stories to his children – one of their favorites being about the great flood featured in the Bible. After reading this particular story several nights in a row, he came up with an idea to build an ark similar to Noah’s!

It was in 1993 that Johan decided to make his vision a reality. He would spend his free time working on the boat, which could comfortably accommodate two of every animal, just like the actual Noah’s Ark!

Although disappointed, Johan was not surprised by the result. He had sacrificed so much time to create his ship but it only measured half the size of Noah’s vessel. If that was his goal, he realized he still had a lot of work ahead. But with no one to help him, he knew it would be impossible to achieve alone. Thankfully, people started offering their assistance

After witnessing Johan’s handiwork, a group of amateur carpenters decided to join him and work on the next phase of the ship. This time, they would create something that looked similar but better than Noah’s ark!

The boat was finally completed in 2012.

When they opened it to the public, everyone was astonished. Johan had spent his own money and time on this project. He estimates that the total cost would be close to $1.6 million. Even though he invested a lot in his ark, Johan knew it wasn’t perfect. He and his team are amateurs, so people who came to visit could tell there were architectural errors.

Johan stated, “We’re not professional boatmakers. A lot of stuff here is a bit crooked.”

Despite the flaws and faults, the ark is still a stunning sight to behold. It’s filled with features like miniature animals to make visitors feel as if they are truly inside Noah’s Ark, with the impending huge flood sweeping all life in this world away.

Johan’s ark is an exact replica of what the real Noah’s ark would have looked like. Johan made sure to follow all of the specifications as it was laid out in the Bible. Even though people found a lot of mistakes, the boat floats!

Johan is looking to sail his ark around the world. He wants to go to Israel, but due to forest fires, his itinerary has been delayed for the time being. In addition, safety is a major concern for him. The fact that the boat does not have an engine, sails, or any other method of steering it while in water is another barrier to sailing it.

For the time being, he intends to use tugboats to maneuver the boat to its various stops including Rio de Janeiro, Havana, Long Beach, San Diego, San Francisco, and so on!

Scariest Bridge In America Leaves Motorists Terrified.. Would You Drive Across This?


These Riddles Will Drive You Nuts, Especially When You Realize How Simple The Answer Is!